What are Upper Control Arms

Have you ever seen the UCA in forums & videos, or heard it from friends? If they are car modification enthusiasts, we bet they are talking about Upper Control Arms without exception. This is the first concept we convey to you. Enjoy high quality control arms with free shipping at KSP Performance. Cause automotive terms are as complex as their meaning, we will use UCA instead of Upper Control Arms in the following.

The UCA is the heart of the front suspension system. In other words, the control arm is the link between the front wheels and the car. Upper control arms and lower control arms are all control arms. It is attached to the wheel assembly at one end and to the body frame at the other. UCA allows the driver to drive the vehicle. It could also guide the wheels in an up and down direction while driving. In conclusion, UCA play a vital role in the overall stability and driving performance of the vehicle despite their simplicity in appearance.

To explain this question, we need to start with the car suspension system. The suspension system is the assembly of all the components that connect the body to the wheels. They have the role of transmitting power, controlling steering and shock absorption. 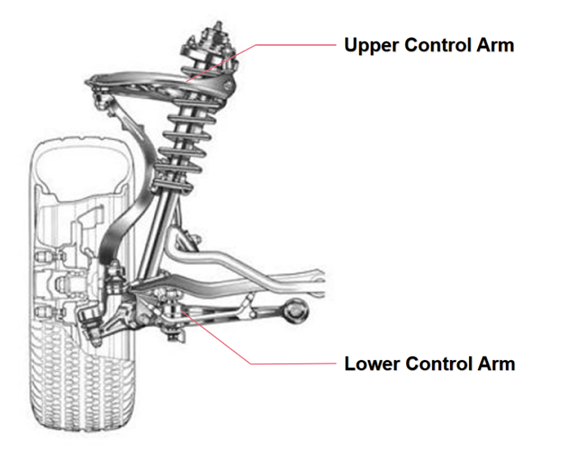 As shown in the diagram, there are two upper and lower wishbone shaped control arms connected to the Knuckle. Such structure is called double-wishbone suspension, also known as double A-arms.

Now the high-end sports cars and the racing cars are basically using the front and rear double-wishbone suspension.

Why do we need to replace the UCA?

By now we are sure that you have understood the role it plays in a double wishbone suspension.

You should also have heard the subject of UCA replacement. It's an issue that is widely discussed among off-road players.

Of course, we won’t deny the improvement it brings to the performance and driving experience of the vehicle when you replaced a better UCA. But we want you to know what you really want before we talk about that question.

1.The wear of the ball joints and bushings.

Usually, the ball joint which connects the UCA to knuckle is the key point to the problem, and you don’t need to replace the UCA in the early stages of the problem.

I used to have a Toyota, the steering wheel of it shook crazily when it is driving at high speeds. But the issue was nicely fixed when I replaced the ball joints on both sides of the UCA.

Likewise, the wear of the bushings can cause an inability to accurately position the wheels (the failure of wheel alignment), which will cause vibration&rattling of tires and even accelerate the wear.

There are many OE arms made from sheet metal. It’s a kind of sheet metal processing. It' s beneficial for OE manufacturers to produce UCA with this processing technique because they could produce the UCA in large quantities quickly and inexpensively. However, the OE UCA with stamping steel may deform during intense use or even break under a single violent impact. We hope you would never encounter this situation.

Aftermarket UCA are made in small batches. And the materials they use are usually more expensive.

The KSP UCA is an enhanced version of the OE UCA. It has stronger impact and deformation resistance.

If you are pursuing a better off-road performance, then it’s a good choice to change a high- strength UCA. It will give your ball joints a more suitable swing range. This will enhance road feedback, but it will also lose some driving comfort at the same time. 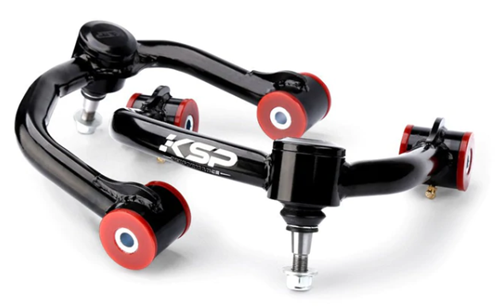 The KSP UCA for 0-2" lift is designed to replace the stock one. It will give your ball joints a more appropriate amount of swing and give your vehicle more support. This will help your front wheels make better adjustments when they encounter road impacts.

We provide bolder and safer pipe diameter in CNC machining.

3.The use of new materials

In order to reduce production costs, the weight of the components had to be reduced. Some brands started to replace metal UCA with composite ones.

We don't know if you like the composites, but we'd definitely prefer a chunky metal UCA.1.     The UCA must be replaced after the vehicle is lifted to a certain height

You may have heard a lot about replacing the UCA.

In fact, whether you need to replace the UCA depends on your lifting method and lifting height.

Generally speaking, if you have lifted your truck with the leveling lift method and the lift height is more than 2", then you will have to change the UCA.

If not, then any bumps and turns are a considerable test for a ball joints at the extreme angle.

And any excessive wear can easily put you in danger.

Previous: Benefits of Camber Kits-What do Camber, Toe and Caster influence separately
Next: Things you need to know when using Lift Kit